skip to main | skip to sidebar

Thank you, crazy toy from my neighbor. You might have saved my birthday.
Until we made homemade playdough at my friend's house last weekend, the only playdouh I owned was the great stuff made by A Toy Garden -- pink is has peppermint essential oil, purple has lavender. They are lovely. But I rarely play with them. I leave that to the babysitter when she and my friend's daughter come over for four hours a week. 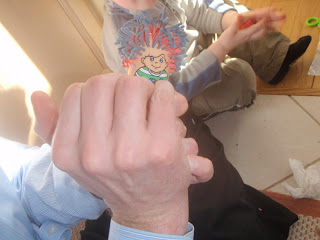 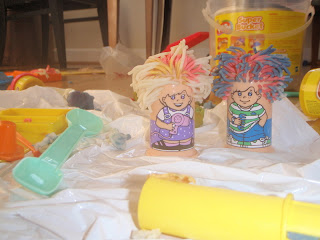 Yesterday my neighbor -- who has supplied us with one of those little coupe cars, lots of plastic trucks that live in the backyard and a recycling truck (and guy!) that hangs out in the living room brought by a whole bag of PlayDoh and PlayDoh accessories. It was not my favorite moment; I was trying to nurse my son so in a short while we could get out of the house to an appointment with the magic chiropractor/homeopath that, I hoped, would cure me of my March malaise. Actually, I made the appt. in February, already feeling the blahs, the negative cycle that is easy for me to slip into that this time of year.

Anyway, my hubby had left for work with the carseat in his car, so I had to scramble to borrow one. A friend dropped one off while the sitter was here and I was working like a madwoman in the basement. A few hours later, when my son was dying to play with this new bag 'o stuff, I was rushing to get the heck out of here in one piece. It was one of those days where every wrong thing means you should never have been born. The sun was shiny bright, obviously mocking my pain. The strap with the clips was too short. I was sobbing, unable to get the seat in the middle, so I tried it on the side. But, alas, carseats are not my forte. Pretty much anything that involves spatial relations and physics gives me the willies.

I thought I had it reasonably secure, but the first corner we turned, my son said, "Whoa!" I looked back at his tippy seat and knew I could not get on the highway. So I pulled into a parking lot and tried to no avail to fix the tension so his seat would be safe. I called the chiro and in between sobs tried to tell her what was going on, see if she was running late. She wasn't. So generously she suggested I call her back so we could settle the $120 I still owed her for the missed appt. What she lacks in compassion she makes up in skill, but I'd have liked to have had the compassion just then.

I put my boy in the front seat so I could try the seat again and at least get it safe enough to go back home, just a few blocks, but through a busy intersection. You know how they say accidents often happen close to home! Guess what? They do. An 80-year-old man was driving through the parking lot perpendicular to me. I looked straight at him thinking, of course he's going to stop and back up to turn the wheel some more. He did not. Crunch. He hit my rear bumper. It was a light tap, but I was already a madwoman with a birthday and a toddler in the front seat. I started screaming, called the cops, told him to get out his insurance card so we could exchange info as the cops advised (he didn't carry it with him, didn't know he was supposed to, just "got here." "Where? To the United States?" He was clearly no recent arrival!) He was a jerk, asking me deadpan to show him the damage, and "was I going fast?" Does it matter? You HIT the car! Apologize, asshole? Take some responsibility!

I took down his driver's license info and as the jerk continued to act like I was just some crazy woman, lit into him with clear ageism: He said he didn't think he'd hit the car, and I said if he couldn't see that kind of obvious accident waiting to happen maybe he shouldn't be on the road. You HIT the car!

Anyway, a friend happened to call me in my worst hour with a kind offer to help, which I rejected. My son held it together well, and I told him we'd go home and do the PlayDoh. His father heard the fear and anger in my voice and said he'd arrange to come home early. My friend from the phone call stopped by, kids sleeping in her car, and got me out of my head a bit such that by the time LJ got here, I was in a better place. It was sunny. We pushed dough through small places and laughed at what was squeezed out. We made spaghetti hair, something my husband had never done as a kid. My son loved it. We made a mess, and then we all cleaned it up. My other friend called to say that she was on for going with me to Lunafest that night. I had a hunch the short-film festival of movies by and about women was going to salvage my day. I just didn't know to what extent, and I didn't know that PlayDoh was going to be the transition that made it possible.

We ordered take-out at the Indian place. LJ took the boy over to his friend's to drop off the loser carseat, and he was thrilled to see his friend outside. I basked in the quiet, uploaded some photos and finally wrote a blog post on my other blog. They got the food and came home. The boy had a great time with his dad, and we had a good dinner. I knew the rest of the night would be nice and that tomorrow would come. It's sunny again. My eyes are a little puffy, but they are dry.
Posted by Crunchy-Chewy Mama at 5:49 PM

My new column at the Washington Times Communities

Mama to one toddler boy, I have one foot in crunchy alternaland and the other in mainstream suburban motherhood.